Once again, it’s time for Ask A Spinster!, the long beloved post series in which Grace answers all your questions. today’s question is especially interesting, but controversial.Neither bottles nor insults should be slung, whilst we discuss in the comments.

Dear Spinsters,
I have a thing for married men / men in relationships and cannot seem to settle for a real relationship. Can I just do my thing and date these guys or should morality prevail and I should steer clear from them?
Yours truly,
C 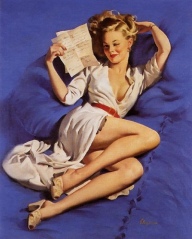 What a brave question! Most people will have an automatic response to your inquiry. You’ve probably encountered this already: rotten tomatoes launched, heads shook in horror, and defenses for the sisterhood of women made. When it comes to affairs, modern ethics are black-and-white.

The short answer, which matches mine, is: steer clear from the attached men. My reasoning, however, is complicated.

I find that society can be all too quick to blame “the other woman” in these situations, rather than the person who actually took a vow of commitment. We cast women as opportunistic harlots preying on the weak wills of poor, tempted menfolk. This is ridiculously unfair. If you’ve made a promise to someone, don’t act like an asshole and give in to sexual longings! Men are not animals. We cannot blame every sin on their penises, then make negative character assumptions about the women involved.

If a married man makes an advance towards you, do I think you’re automatically a harlot for accepting it? Of course, not. This isn’t always a straight-forward situation, from any side, so we need approach the larger questions for you. What worries me is the health, emotionally and physically, of such a relationship. What is your end goal here? Do you want one of these affairs to turn into a real relationship?

If the answer is yes, then I caution you. The covenant of commitment is important. When we enter a monogamous relationship with someone, we expect it to stay monogamous. We’re more vulnerable, both sexually and mentally, because of that implicit exchange of trust. Anyone who can throw away such trust so easily once, can surely do it again. If you want a solid relationship, then starting with a broken promise is a bad way to get there. Even if he turns out completely committed to you, how will you ever know?

Additionally, if a committed relationship comes out of an affair, will your conscience be able to reconcile your happiness with being complicit in the hurt of another person? While there are some marriages in which affairs don’t cause harm, because of emotional or relational circumstances, most spouses expect—rightfully—fidelity from their partners. The realization that a spouse is cheating is, for most people, world shattering. It’s hard to shatter worlds, even when love is involved, and not feel guilt. It’s human nature, thank heavens. Living with such guilt, the kind that stays and festers, is no easy feat.

If you don’t expect these relationships to go anywhere, then my concerns are graver still. There are less emotionally destructive ways to have casual relationships. Affairs, from all sides, are messy. If a spouse or girlfriend discovers the affair, what will she do? Most women are sane, coping through a nice bout of chunking shit out windows and impressive streaks of cussing, but there are the Lifetime movie girls. Having affairs really increases the chance that someone will plot your demise. Meanwhile, a nice friends-with-benefits tryst usually ends in awkward small talk at a grocery store. Grace’s Rule for Life #42:Try to avoid encouraging other people to plot your demise.

Why risk becoming fodder for Nancy Grace, if you don’t have to? I’ve done the pro/con and it never looks rosy for the side of affairs. They may be more exciting, but you can always go cliff diving instead. Some people find their true love, because of an affair—take Spencer Tracy and Katherine Hepburn, for example—but more end in tears or cyanide. Even Tracy and Hepburn had issues—despite over two decades of love, Hepburn didn’t feel right attending his funeral, out of respect for his wife. If even she had heartbreaking complications, surely us mere mortals will? Real relationships may not fare any better, but at least they have a fighting chance.

Good luck, my dear, whatever you choose.

With love and pie,

If you have questions you’d like answered by your friendly local spinster, leave them in the comments or e-mail them to us!

8 thoughts on “Ask A Spinster: Beware the Affair”